My excuse for coming in second – or am I third? – is that I misplaced my copy. It’s somewhere in the house – probably in a box in the attic – but damned if I can find it. In the end I had to resort to interlibrary loans.

Yep, loans – because my copy of Patton’s Gap is the 1998 “Second Edition”, issued seventeen years after the first. One of us had to compare the two, right?

You each owe me a beer. 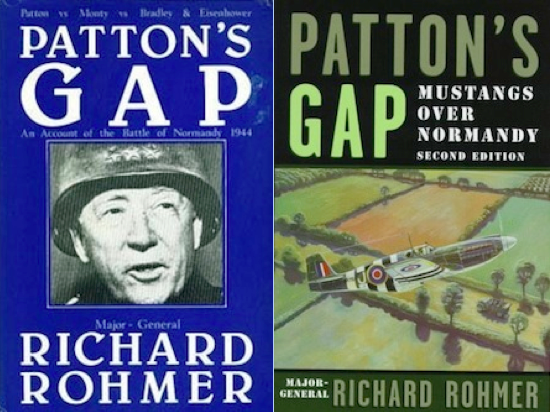 Given the criticism Patton’s Gap received – see: Carlo D’Este, Max Hastings, William French et al – I expected Rohmer to take the opportunity to correct, clarify and revise. I also thought he'd be bringing further documents to support his contention that his hero, Lieutenant General George S. Patton, Jr, was robbed of the glory offered in closing the Falaise Gap. Reading Rohmer’s “Preface to the Second Edition” reinforced my expectations:


From the time Patton’s Gap was first published in 1981, I have come upon three items that both shed new light on the Battle of Normandy, fought in the summer of 1944, and enable us to see the event from the viewpoints of two important historical figures.

I was wrong. There are no revisions, no corrections, no clarifications; no additional information is on offer. The central text remains unchanged, to be followed by a new Afterword in which the author shares the discovery made in 1985, when researching Rommel & Patton, that he had played a role in the 17 July 1944 attack on the Dessert Fox. Rohmer cites as evidence an entry for the same day found in the 430 Squadron Log… and nothing more.

It’s hard to criticize Rohmer without coming off as some sort of ingrate – believe me, I appreciate his service – but this Afterword just doesn’t convince. The Major-General reads the entry and then:


Immediately my memory of that day returned, and I could picture clearly that huge staff car traveling south from Livarot on the sideroad just to the west of the Livarot-Vimoutiers highway. I had been about 1,500 feet leading a second of four Mustangs when I came upon the impressive vehicle. I could tell there were brass in the car because the sun glinted off their caps and uniforms. But I had no idea at the time that I was looking down on Field Marshal Rommel.

I don't know. Maybe I'd be more willing to accept the forty-one-year-old memory if it hadn't come from a man who three pages earlier had argued against the accuracy of Omar Bradley’s “seven year memory”.

Look, Rohmer may have played a role in the attack on Rommel – I like to think he did – but without further research how can he be so sure? "I did catch Rommel shortly after 16:00", he writes.

And what are we to make of the two appendices that follow.

In “Appendix I: The Colonel Borders Connection”, Rohmer reports that in 1981 he received a handwritten letter of appreciation from Colonel Bill Borders (reproduced in full), “who had served on Patton’s immediate staff”. No bias there. “I used Colonel Border’s letter in developing my fact-fiction treatment of the incident in Rommel & Patton”, writes Rohmer, who then presents five pages from the novel in question.

The inclusion of “Appendix II: The President Reagan Connection", is even harder to justify. Remember, in his Preface Rohmer writes that the reason for the "Second Edition" comes through “three items that both shed new light on the Battle of Normandy, fought in the summer of 1944, and enable us to see the event from the viewpoints of two important historical figures.”

Because I’m a bastard I’ll backtrack a bit here by pointing out that the 430 Squadron Log was not a new item; the entry in question was simply one he'd never taken time to read. Is Colonel Bill Borders a historical figure? His name doesn't feature in Patton's wartime memoir, and is not found in the 944-page Patton Papers: 1940-1945. I've yet to come across the name Bill Borders in a Patton biography.

That Reagan counts as an historical figure cannot be denied. What new light does the actor shed on the Battle of Normandy? What did he see from the distance of Hollywood home?

And yet, in July of 1984 the President sent a 102-word letter thanking Rohmer for a copy of Patton’s Gap. Not one of those words concerns the Battle of Normandy; twenty-five are about Patton:


Thank you too for marking the pages relating to your meeting with our hero. I’ve already read them – and yes they are typical of our hero.

I haven’t been able to determine whether Reagan and Patton so much as met, though the actor did narrate this:


Because I’m a bastard: Rohmer twice describes the letter sent by Reagan, along with the envelope in which it arrived.

One last thing: The second edition changes the original title, Patton’s Gap: An Account of the Battle of Normandy 1944 [sic], to Patton’s Gap: Mustangs Over Normandy. Both are accurate, but why not simply Patton’s Gap Two?

Yes, I am a bastard.