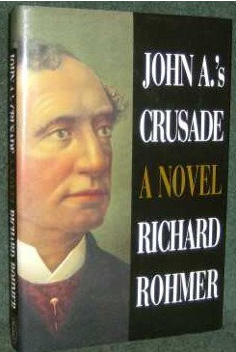 I raced through Sir John A.'s Crusade, but only because the copy I had was an inter-library loan and could not be renewed.

Here are a few things to look out for:

Bullshit
Rohmer imagines at least two characters – Robert Wilmot and George-Étienne Cartier – uttering the word. Fathers of Confederation both, I felt this was in poor taste, doubly so since its use can be traced back no further than 1915 America.

Errors in calculation
Foul-mouthed Cartier pegs Macdonald's age at 52. In fact, he was 51.
Macdonald describes the year in which all action takes place as the twenty-ninth in Victoria's reign. In fact, it is the thirtieth.

Exclamation marks
I'm certain that there are more here than in any other Rohmer novel.

Kelly
Rohmer likes to position himself as something of a seer.
"Balls!" you say. "The man couldn't have been more wrong about the Soviet Union."
"True enough," I reply, "but consider last week's events in Buffalo. One of the dead was found in a car covered by snow."
As if further evidence was needed that Rohmer is in tune with Geller, I point out that Sir John A.'s Crusade features a villain with the very same surname as one of his future critics.

Resplendent
Reading Richard Rohmer, you begin to recognize common threads. Vodka and how to dull its effects is one example. Not everything is so obvious. It wasn't until Sir John A.'s Crusade that I first noticed "resplendent", a word I don't think I've ever used in my own writing.
Going back, I see that it was there from the beginning. In Ultimatum we find members of the RCMP "resplendent in their traditional red-coated uniforms". It's used in describing Patton's garb in Patton's Gap. The word appears in Red Arctic and – spoiler – Rohmer's biography of E.P. Taylor. Resplendent is used four times in Generally Speaking. It also appears four times in Sir John A.'s Crusade. Which brings me, finally, to…

Fetishism
You'll not find so shameless a display of perversity as this passage from Sir John A.'s Crusade:


The Right Honorable Henry Wellesley, Earl Cowley, was resplendent in his ambassador's uniform. He wore a black jacket, with a high collar and epaulettes; the gold braid decorating it was enhanced with royal reds and blues. A crimson sash crossed from the right shoulder to the opposite hip; half a dozen medals on multi-coloured ribbons were pinned to the left side of the jacket, over the ambassador's chest. Below them sat thge star of his rank with which his Queen had vested him. His black trousers bore wide gold stripes down the outside seams. Those stripes disappeared into highly polished half-Wellington boots.
A short ceremonial sword in an elaborately engraved and embossed scabbard hung from a broad gold-decorated belt that encircled Earl Cowley's considerable girth. On his head sat, foursquare, a large black cocked hat covered with more gold braids, its forward point jutting straight out from his wigless wide forehead. Across the hat's crest several white plumes…

There's more, but you get the picture.

Lest you wonder, I don't mention the "busby-capped soldiers of Her Majesty's Grenadier Guard" because "resplendent" is not used.